From part 2 of the Fox timeline
http://foxnewsinsider.com/2012/10/20/special-report-investigates-timeline-of-terror-in-benghazi/

This is a video capture of the ansar al-Sharia (Literally "partisans of sharia law", but better translation would be "The Islamic Terrorists No Longer Known As Al Qaeda") trucks at the Benghazi mission attack, which witnesses stated were clearly marked as belonging to the militia group.


Ansar al-sharia is made﻿ up of militants who fought against Americans in Iraq and Afghanistan.
Posted by Oliver Grant at 4:43 PM No comments:

On one level it confirms that Stevens was NOT some liberal naif when he docked in Benghazi in April 2011 to serve as point man to the so-called "rebels"-- that cutesy bluff of a name which disguises a movement better described by Clare M. Lopez as "individuals and groups that were, at a minimum, allied ideologically with Al Qaeda." No real stretch to simplify and call Stevens the Obama administration's point man to al Qaeda.
http://www.dianawest.net/Home/tabid/36/EntryId/2280/The-Jihad-and-Christopher-Stevens-Pt-2.aspx 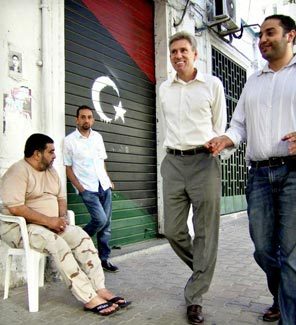 Christopher Stephens in Tripoli, June 2012
---
In analyzing the Benghazi scandal, it is crucial to highlight not only the dangers of relying on jihadist armed gangs for American security in Benghazi, but also the betrayal of American principle undertaken by the Obama administration in setting such a policy in place. The fact is, relying on "local militias" was not some stop-gap practice; it was official US policy. This begins to tell us why "Benghazi-gate" is so much more than an inquiry into a calamitous security break-down, and the ghastly chain of lies the administration told thereafter.
On March 28, 2012,  Regional Security Officer Eric Nordstrom sent a cable from Libya requesting more  security. His request was denied. This cable, however, is evidence of more than State's negligence in failing to address a dangerous security situation that would be exploited by al Qaeda affiliates on September 11, 2012. In the cable, Nordstrom makes note of the fact that "rebuilding and expanding post's PSA Local Guard Force" was one of his "core objectives." Further: "As recommended by the Department, post is developing plans to transition our security staffing ... to [a model] that incorporates more locally-based and non-emergency assets."
Naturally. these "plans" weren't working. Hence, Nordstrom's request for more American security. And hence the denial from State for reasons, Nordstrom recently told Congress, that came down to the fact "there was going to be too much political cost.” But what politics drove such a recommendation? Here is where the entire Libyan debacle, the debacle of "Arab Spring" -- Arab Jihad -- comes into play. It is time to reckon with the fact that despite the grand talk of democracy and human rights, President Obama ordered Uncle Sam to join that jihad in 2011, precipitously pulling support from a long-standing ally in Egypt and a post-9/11 ally in Libya to empower the vanguards of  liberty-supressing Islam, extending the reach and dominion of a hostile, totalitarian system.
Obama was hardly alone, drawing support from left-wing Democrats, the UN crowd, media, the GOP establishment, George W. Bush, "neocons," all of whom boosted this same "Arab Spring," often for different reasons. One of the great champions of what we should start thinking of as the jihad outreach such a policy necessarily entails was the late Ambassador Christopher Stevens, and long before he arrived in Benghazi during "Arab Spring."
Thanks to Wikileaks, we have a series of US Libyan embassy cables, starting in December 2007, which document what became rather an abiding interest in two repatriated ex-Guatanamo detainees, Ben Qumu Abu Sufian Ahmed Hamouda and Muhammad Abdallah Mansur al-Rimi -- ben Qumu in particular.
For the next six months or so, cables, some by Stevens, some by other personnel, track embassy access to these detainees, their condition, and their welfare in their Libyan detention. One cable (not by Stevens) details an extended family visit to Qumu. His relatives, the cable reports, "were able to bring some food, clothes, personal hygiene items and reading materials to him. Tarnish [a security officer] described [Qumu's] physical condition and spirits as `very good' and indicated  that security officials at the facility ... had allowed the family to stay with him for a few extra hours in light of the impending New Year's holiday."
Why the solicitude for a high-ranking al Qaeda member with connections to a terror financier? Ben Qumu, a native of Derna in eastern Libya, rose in the al Qaeda ranks after training at an al-Qaeda camp in Afghanistan in the 1990s, reportedly serving under bin Laden in Sudan after which he fought with the Talban. He was captured in 2002 along the Af-Pak border and sent to Gitmo before being repatriated to Libyan custody in 2007.  He would be released in a Libyan government reconciliation program in 2010.
Another cable, this one by Stevens on June 6, 12, 2008, assesses the attitudes of ben Qumu and al-Rimi toward their new prison, Abu Salim, compared to their old facility, known as ESO. They both "expressed a desire to return from Abu Salim prison to the ESO facility," Stevens wrote.
Why did Stevens care? Why was the US Embassy so concerned? Something else I wonder is who among the diplomats who served with Stevens has made the connection between Stevens' interest in ben Qumu in 2008 and news reports identifying ben Qumu as the leader of the terrorist attack in which Stevens and three other Americans were murdered.
This US government report [AL-QAEDA IN LIBYA: A PROFILE] on al Qaeda infiltration of Libyan militias further identifies Qumu as a leader of Ansar al Sharia, the group believed to have led the consulate assault.
It's a stunning, sickening circle, but it is also the noxious metaphor for the deadly course of Uncle Sam's outreach to jihad.
To be cont'd.
---
Follow me @diana_west_ 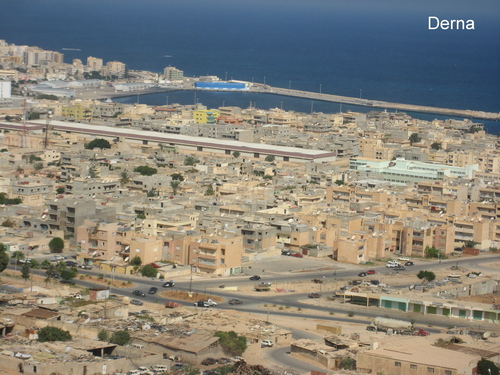 Posted by Oliver Grant at 12:34 PM No comments:


Guess who else called it a "spontaneous popular uprising" Maybe this is where Obama's intelligence source was.... Al Queda.

Ansar al-Sharia faced accusations it carried out the 2012 U.S. Consulate attack in Benghazi. The group issued a statement asserting that it "didn't participate as a sole entity," and that the attack "was a spontaneous popular uprising" to an anti-Islam film.[8] However, witnesses at the scene of the assault said they saw pickup trucks labeled with the group's logo, and that fighters attacking the embassy acknowledged at the time that they belonged to Ansar al-Sharia.[7] Witnesses also claimed to see Ahmed Abu Khattala, a commander of Ansar al-Sharia, leading the embassy attack.[9]

Posted by Oliver Grant at 2:14 PM No comments:


That dedication of Prairie Fire to Sirhan Sirhan is just the tip of the iceberg. He also supported South Yemen as an Arab Cuba, now it's home to Al Queda.

No wonder Ayers and Obama are working with George Soros. Ayers is now part of Obama's education reform program.

I managed to find a copy of a book authored by "Billy" Ayers and Bernardine Dorhn titled "Prairie Fire".   I have included a copy of passages transcribed, verbatim, into a word doc.


Page 123 The Palestinian Liberation Movement
The Palestinian struggle is a genuine and deep-rooted movement for national liberation. .. There is a sobering similarity between the situation of the Palestinians and the history of the Native American people.  The reality is that Israel is an expansionist power, based on Zionist colonialism.
Page 124
From its inception, Zionism has been an imperial ideology, presented as an alternative to communism.
Page 125
Israel is an expansionist country.  ..
Israel is a class society.
Page 126
Zionist colonialism has cultivated a worldwide image as the besieged victim, the heroic victim holding off the barbarians, a semi-socialist state where strong and free sabras made the desert bloom, the refuge and guarantee against anti-Semitism.  The reality is very different:
-The Zionist state is clearly the aggressor, the source of violence and war in the Mideast, the occupier of stolen lands…It is racist and expansionist – the enemy of the Palestinians, the Arab people, and the Jewish people.
-Israeli society internally reflects this imperialist reality; militarized, commercial and competitive.
-The myth of the kibbutz is a powerful one, but the kibbutzim never contained more than 5% of the Jewish population of Palestine or Israel, and are no evidence for Israel being a socialist country.  Many of the kibbutzim are on land which Palestinian peasants were driven from, some directly exploit Palestinian labor. And they are all subsidized by Zionist funds.
-Zionism does not represent Jews.  It is a racist ideology based on a claim that “God” chose a people superior to others.  It has been consistently used as an alternative to class struggle and socialism for Jews, undermining Jewish progressive and working-class traditions.
-There is no basis for a claim that Zionism is a bulwark against anti-Semitism….
[!@#$% white movement??? !@#$% ]
The white movement in the U.S. has failed to give clear and open support to the Palestinian struggle.  We have not taken on the necessary task of exposing the myths about Israel that cloak the true situation and disarm many people.
Page 127
The Palestinian liberation movement is a most progressive force in the politics of the Mideast, as in the revolution of South Yemen – known as the Cuba of the Mideast.   [Now home to Al Queda]
Page 128
The U.S. people have been seriously deceived about the Palestinians and Israel.  …
SELF-DETERMINATION FOR THE PALESTINIAN PEOPLE!
U.S. OUT OF THE MIDEAST!
END AID TO ISRAEL!

Posted by Oliver Grant at 3:19 PM No comments: